The Rawls Course at Texas Tech

Any list of the best golf courses in the country shouldn’t include too many surprising destinations. Most of the United States’ renowned, beautiful courses are in equally beautiful places. Augusta National in Georgia, obviously. Pebble Beach in California, sure. Seven of the top 10 are in the northeast, surrounded by lakes, oceans and a colorful assortment of New England oak trees. These courses had a lot to work with. That’s why it’s that much more astonishing when a list-topping golf course pops up in a place like Lubbock, Texas.

You can’t tell by looking at it now, but the Rawls Course at Texas Tech University used to be nothing but a cotton field. A cotton field with only 18 inches of elevation change from one side to the other, to be exact. Somehow, this flatland on the plains of West Texas was transformed into a lavish, 268-acre paradise consistently named one of the best golf courses in Texas as well as one of the best collegiate courses in the country. This transformation wasn’t simple – in fact, it was one of the most complicated the design team at Renaissance Golf had ever done – but with leaders as daring and ambitious (and possibly even a little crazy) as Jerry Rawls and Tom Doak, Lubbock became the unlikely home of one of the finest golf courses in the nation.

Flashback to 2001 – when the Rawls Course was nothing but an agricultural research field and the Rawls name was not yet adorning facilities on Texas Tech’s campus. Jerry Rawls himself was just a successful alumnus with an interest in golf. Rawls graduated from Texas Tech in 1967 with a degree in mechanical engineering and soon made his way to Purdue University for graduate school. While at Purdue, his interest in golf sparked when he began playing friendly rounds with classmates and professors. It didn’t take him long to realize the extent of the campus course’s effects on the community; its value was immeasurable. Everyone from students, alumni and community members to the city’s economy benefited from the course. The Birck Boilermaker Golf Complex was able to host a variety of crowd-drawing events, boost the university’s golf program and even help in the recruitment of the athletes, students and faculty. Rawls was intrigued, so much so he remembered that course’s value more than 30 years later when Texas Tech announced an interest in building its own campus golf course.

After meeting with the Texas Tech group leading the project, Rawls agreed to involve himself on two conditions. First, the course had to be located on campus. He liked the idea of close proximity tying the course’s activity in tightly with the rest of the university community. Second, it had to be one of the finest collegiate golf facilities in the country. Piece of cake.

Rawls’ first task was to hire a golf course architect who could accomplish the ambitious mission he had in mind. A friend suggested he reach out to Tom Doak.

In Traverse City, Michigan, 1,430 miles northeast of Lubbock, Doak, of Renaissance Golf Design, was fresh off his latest project: a course in Oregon called Pacific Dunes that sits pleasantly along the Pacific coastline, emerging from shore pines to 60-foot sand dunes with an ocean view wrapping 180 degrees around the resort. It may well have been one of the best sites for a golf course any designer has been given, and because of this, Doak didn’t believe he and his team were given sufficient credit for its completion. He suspected the site’s rolling dunes and 100-foot bluffs over the sea actually diminished the work he and his team had done in critic’s eyes; he had been given too much to work with. Perhaps if he took on a project in a destination more challenging, more of a blank slate – a cotton field, for example – then he and his team may finally get the recognition they deserve.

Enter Jerry Rawls. Rawls contacted Doak about his project, and Doak was immediately interested. For one, he had always been attracted to the idea of designing a university course. Mostly, though, he liked the challenge of creating a first-rate golf course out of nothing but a cotton field. If he was working with 18 inches of elevation change instead of rolling dunes on 100-foot seaside bluffs, he and his team’s prowess could not be denied. Rawls and Doak soon met at the Pacific Dunes course in Oregon, where Rawls could see, first-hand, Doak’s philosophies and design talents represented on the course. They shook hands and sealed the deal.

The Rawls Course broke ground in late 2001. With Rawls’ $8.5 million donation in place, Doak and his team from Renaissance Golf were now faced with the challenging task of creating a landscape from scratch. More than one million yards of topsoil were moved from the 268-acre plot on the northwest edge of campus, a significant amount of earthwork – more than Renaissance Golf’s previous 10 projects combined – but necessary both to breathe life into the fairways and to hide the surrounding development from view.

The design of the course, described by the team as the most complicated they had done to date, was intended to mimic the valleys and canyons of the Caprock region east and south of Lubbock. The landscape was built first, with fairway contours and rugged bunkers meant to embody the natural erosion of a canyon, with the playing holes being built around it. The Rawls Course, which is surrounded by 10-15-foot berms, looks as if it has eroded straight into the ground – in fact, someone driving by at the rim can hardly see the course at all. The plot of land that began with just 18 inches of elevation change now has more than 30 feet. Doak believes elevation is the soul of all great golf courses – and he would know, having seen more than 1,000 of the world’s greatest links.

Doak asked his team to select some of the best holes they had seen to influence play design on the Rawls course. It wasn’t his intention to duplicate other holes, but rather determine what characteristics made certain holes more exciting. Discussing these influences helped the team see how certain holes fit into the demands of the Rawls Course design. Though the Renaissance team was previously an avid believer in the minimalist philosophy, the Texas Tech project turned out to be anything but minimal. It turns out moving more than a million yards of dirt and being creative about where to replace it is quite the challenge, but it seems Doak’s team knocked it out of the park – or rather, hit a hole-in-one.

The Rawls Course at Texas Tech is now a secluded campus oasis that serves students, faculty, alumni and community members alike. Its 125 acres of fairway along with a 55-acre driving range, short game practice area and indoor hitting bays equipped with digital coaching system software rack up an average of 35,000 rounds each year. With unusually wide fairways, boldly contoured greens, friendly and knowledgeable staff and efficient outdoor services, the Rawls Course has been home to several Big 12 Conference events and helped position Texas Tech as a leader in NCAA championship golf. It also has benefited a variety of academic programs at the university, from turf management and marketing studies to catering and sports science classes.

More importantly, though, it brought to the Lubbock and Texas Tech community everything Jerry Rawls had hoped: a course that can test collegiate players, provide a social venue for the university and community and earn the title of one of the best collegiate golf courses in the country. Piece of cake. 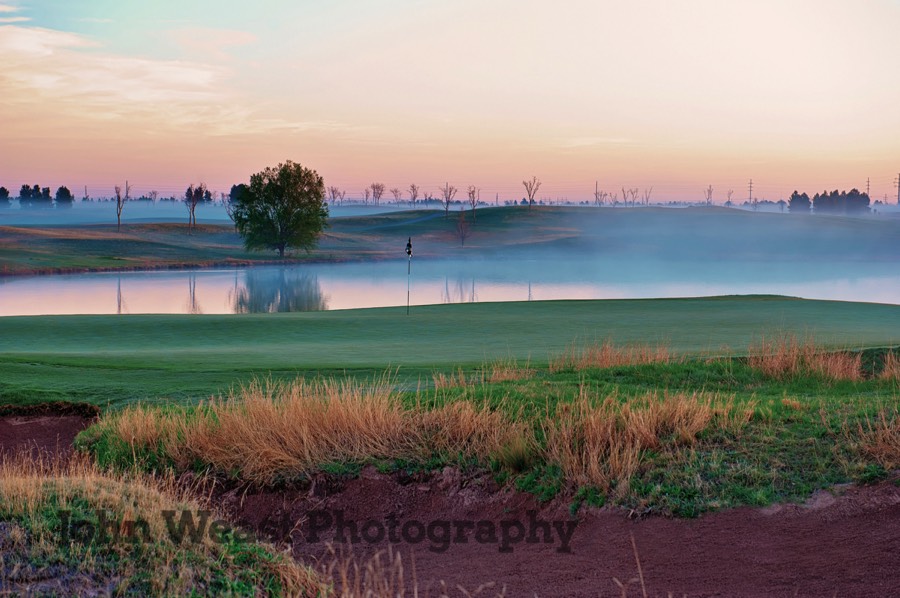